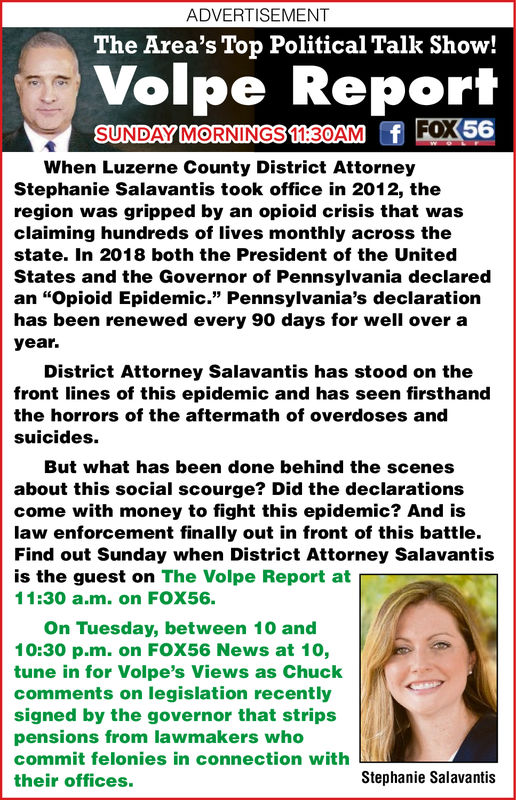 ADVERTISEMENT The Area's Top Political Talk Show! Volpe Report SUNDAY MORNINGS 11:30AMf6 When Luzerne County District Attorney Stephanie Salavantis took office in 2012, the region was gripped by an opioid crisis that was claiming hundreds of lives monthly across the state. In 2018 both the President of the United States and the Governor of Pennsylvania declared an "Opioid Epidemic." Pennsylvania's declaration has been renewed every 90 days for well over a year. District Attorney Salavantis has stood on the front lines of this epidemic and has seen firsthand the horrors of the aftermath of overdoses and suicides. But what has been done behind the scenes about this social scourge? Did the declarations come with money to fight this epidemic? And is law enforcement finally out in front of this battle. Find out Sunday when District Attorney Salavantis is the guest on The Volpe Report at 11:30 a.m. on FOX56. On Tuesday, between 10 and 10:30 p.m. on FOX56 News at 10, tune in for Volpe's Views as Chuck comments on legislation recently signed by the governor that strips pensions from lawmakers who commit felonies in connection with their offices. Stephanie Salavantis