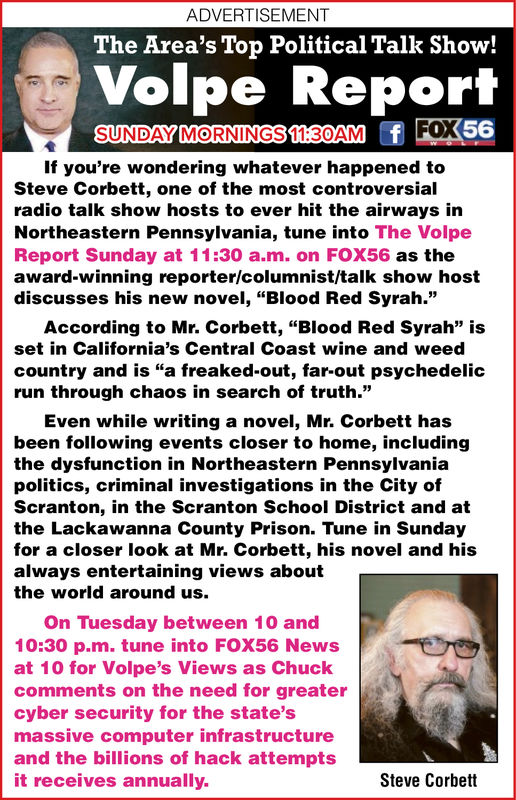 ADVERTISEMENT The Area's Top Political Talk Show! Volpe Report SUNDAY MORNINGS 11:30AMf6 If you're wondering whatever happened to Steve Corbett, one of the most controversial radio talk show hosts to ever hit the airways in Northeastern Pennsylvania, tune into The Volpe Report Sunday at 11:30 a.m. on FOX56 as the award-winning reporter/columnist/talk show host discusses his new novel, "Blood Red Syrah." According to Mr. Corbett, "Blood Red Syrah" is set in California's Central Coast wine and weed country and is "a freaked-out, far-out psychedelic run through chaos in search of truth." Even while writing a novel, Mr. Corbett has been following events closer to home, including the dysfunction in Northeastern Pennsylvania politics, criminal investigations in the City of Scranton, in the Scranton School District and at the Lackawanna County Prison. Tune in Sunday for a closer look at Mr. Corbett, his novel and his always entertaining views about the world around us. On Tuesday between 10 and 10:30 p.m. tune into FOX56 News at 10 for Volpe's Views as Chuck comments on the need for greater cyber security for the state's massive computer infrastructure and the billions of hack attempts it receives annually. Steve Corbett