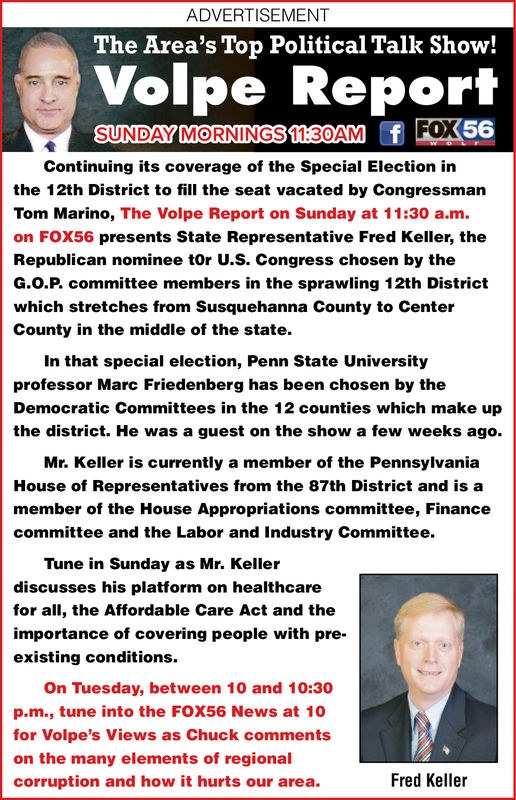 ADVERTISEMENT The Area's Top Political Talk Show! Volpe Report SUNDAY MORNINGS11:30AM f FOX Continuing its coverage of the Special Election in the 12th District to fil the seat vacated by Congressman Tom Marino, The Volpe Report on Sunday at 11:30 a.m. on FOX56 presents State Representative Fred Keller, the Republican nominee tOr U.S. Congress chosen by the G.O.P. committee members in the sprawling 12th District which stretches from Susquehanna County to Center County in the middle of the state. In that special election, Penn State University professor Marc Friedenberg has been chosen by the Democratic Committees in the 12 counties which make up the district. He was a guest on the show a few weeks ago. Mr. Keller is currently a member of the Pennsylvania House of Representatives from the 87th District and is a member of the House Appropriations committee, Finance committee and the Labor and Industry Committee. Tune in Sunday as Mr. Keller discusses his platform on healthcare for all, the Affordable Care Act and the importance of covering people with pre- existing conditions. On Tuesday, between 10 and 10:30 p.m., tune into the FOX56 News at 10 for Volpe's Views as Chuck comments on the many elements of regional corruption and how it hurts our area. Fred Keller