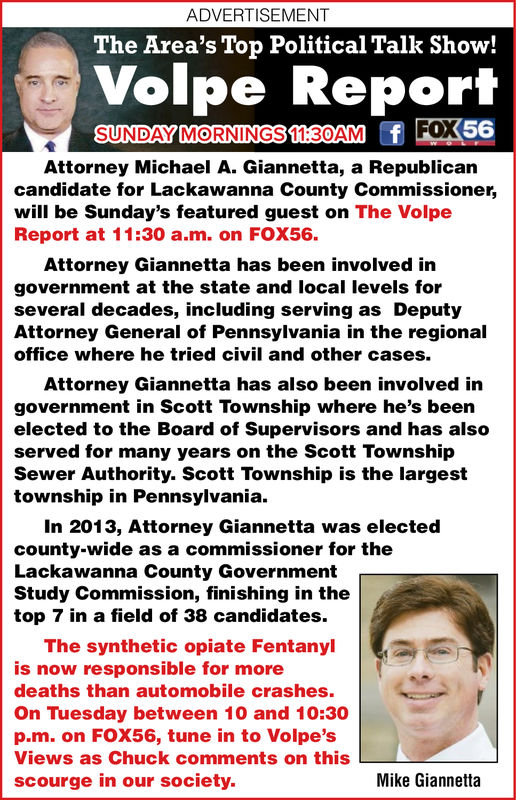 ADVERTISEMENT The Area's Top Political Talk Show! Volpe Report SUNDAY MORNINGS 11:30AM f-- 56 Attorney Michael A. Giannetta, a Republican candidate for Lackawanna County Commissioner will be Sunday's featured guest on The Volpe Report at 11:30 a.m. on FOX56. Attorney Giannetta has been involved in government at the state and local levels for several decades, including serving as Deputy Attorney General of Pennsylvania in the regional office where he tried civil and other cases. Attorney Giannetta has also been involved in government in Scott Township where he's been elected to the Board of Supervisors and has also served for many years on the Scott Township Sewer Authority. Scott Township is the largest township in Pennsylvania. In 2013, Attorney Giannetta was elected county-wide as a commissioner for the Lackawanna County Government Study Commission, finishing in the top 7 in a field of 38 candidates. The synthetic opiate Fentanyl is now responsible for more deaths than automobile crashes. On Tuesday between 10 and 10:30 p.m. on FOX56, tune in to Volpe's Views as Chuck comments on this scourge in our society. Mike Giannetta