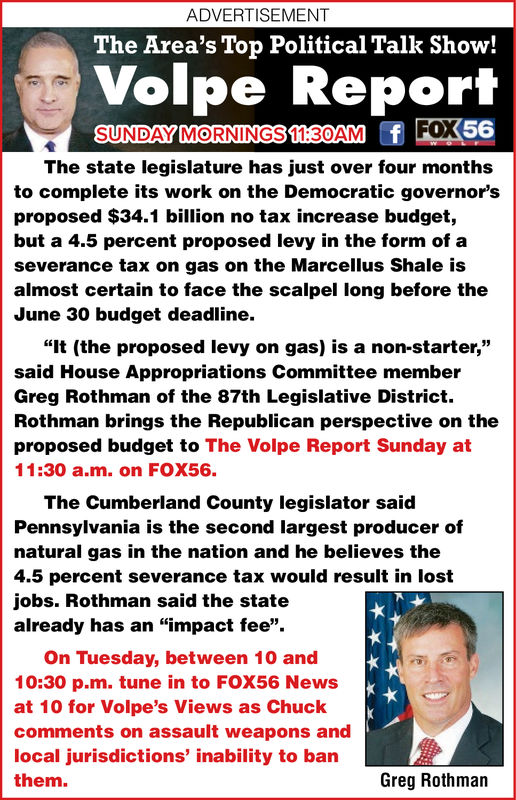 ADVERTISEMENT The Area's Top Political Talk Show! Volpe Report SUNDAY MORNINGS SOAMf FOX56 SUNDAY MORNINGS11:30AM f The state legislature has just over four months to complete its work on the Democratic governor's proposed $34.1 billion no tax increase budget, but a 4.5 percent proposed levy in the form of a severance tax on gas on the Marcellus Shale is almost certain to face the scalpel long before the June 30 budget deadline. "It (the proposed levy on gas) is a non-starter," said House Appropriations Committee member Greg Rothman of the 87th Legislative District. Rothman brings the Republican perspective on the proposed budget to The Volpe Report Sunday at 11:30 a.m. on FOX56. The Cumberland County legislator said Pennsylvania is the second largest producer of natural gas in the nation and he believes the 4.5 percent severance tax would result in lost jobs. Rothman said the state already has an "impact fee". On Tuesday, between 10 and 10:30 p.m. tune in to FOX56 News at 10 for Volpe's Views as Chuck comments on assault weapons and local jurisdictions' inability to ban them. Greg Rothman