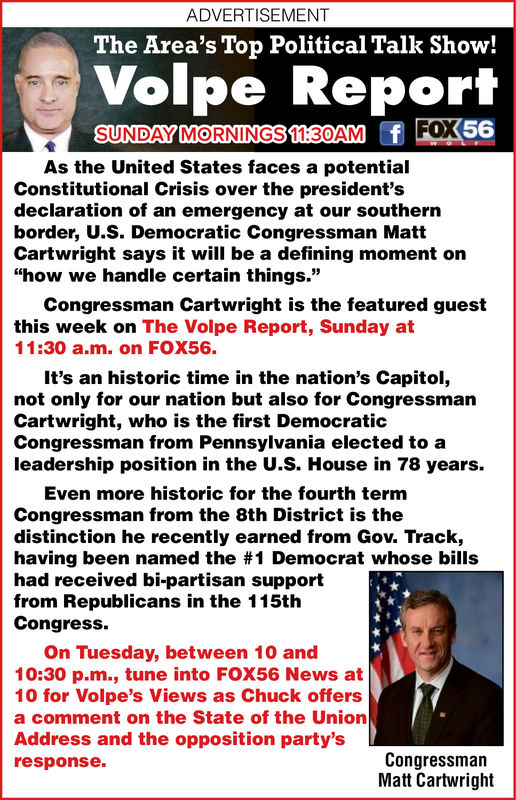 ADVERTISEMENT The Area's Top Political Talk Show! Volpe Report FOX56 SUNDAY MORNINGS11:30AM f As the United States faces a potential Constitutional Crisis over the president's declaration of an emergency at our southern border, U.S. Democratic Congressman Matt Cartwright says it will be a defining moment on "how we handle certain things." Congressman Cartwright is the featured g this week on The Volpe Report, Sunday at 11:30 a.m. on FOX56. uest It's an historic time in the nation's Capitol, not only for our nation but also for Congressman Cartwright, who is the first Democratic Congressman from Pennsylvania elected to a leadership position in the U.S. House in 78 years. Even more historic for the fourth term Congressman from the 8th District is the distinction he recently earned from Gov. Track, having been named the #1 Democrat whose bills had received bi-partisan support from Republicans in the 115th Congress. On Tuesday, between 10 and 10:30 p.m., tune into FOX56 News at 10 for Volpe's Views as Chuck offers a comment on the State of the Union Address and the opposition party's response. Congressman Matt Cartwright